Kingston has Jamaica's most authentic and exciting entertainment offering. From bars and night clubs to weekly street street dances, theatre, poetry readings, comedy and dance, if it's culture you crave, look no further.

Kingston is the heartbeat of Jamaica; it drives the island's cultural and economic pulse. While Jamaica's major tourist centers of Montego Bay, Ocho Rios, and Negril are a surreal world straddling a party paradise inside walled all-inclusive resorts and a meager existence outside, where locals hustle just to get by, Kingston is refreshing for its raw, real character.

Many Jamaicans love a good party or "session" as they call it, and Kingston has the most consistent and varied nightlife to support partygoers and dance enthusiasts. Don't be alarmed should someone approach to within intimate distance for what is known as a slow "whine" in a club or at a street dance. But it's not just "whining "that Kingston offers. While still less than cosmopolitan in terms of its entertainment offering (you won't find an opera house), the city does support a wide array of cultural and artistic forms from modern dance to art and theater. Of course music touches everybody, and Kingston's nightclubs deliver a raw celebration of music on dance floors and in the streets.

There's no need to hurry in Jamaica, as everything inevitably starts late--certainly true for nightlife. Family-oriented and cultural entertainment generally starts earlier in the evenings, between 7 and 10 p.m. Few people go out to a nightclub before midnight, and clubs don't typically fill up until 2 or 3 a.m. Street dances start particularly late and can be quite boring until a sizeable crowd gathers and people start showing off their moves amidst pan-chicken vendors, enormous speakers, wafting ganja smoke, and a rising sun. Expensive all-inclusive parties maintain an exclusive crowd with ticket prices in the range of US$100. These parties have become quite popular, with the Frenchman's parties at the vanguard of Kingston high society chic for its food and select crowd. UWI and University of Technology campuses host parties somewhat regularly.

Nanook is a bar and performance space geared towards creativity that promotes up-and-coming artists as part of its mission to help Caribbean people find a livelihood through art. Live music performances, spoken word and live art are regular features.

Regency Bar & Lounge (Mon-Thurs 11 a.m.-1 a.m., Fri-Sat 11 a.m.-2 a.m., Sun 11 a.m.-12 a.m.) is one the most Uptown popular bars in Kingston, catering to guests of the Terra Nova All-Suite Hotel and well-heeled locals alike. It's also one of the most expensive watering holes in town, but the scruptious appetizers are well worth the cost. Try the duck pisaladiere The over-the-top posh interior reminiscent of a victorian noble's lair is complemented with more modest furnishings in the open air courtyard surrounded by tropical foliage.

The Deck (open daily from 4:30 p.m. until the last person leaves) is a large venue with a boat motif. Fishing nets hang from what was once the roof of an auto garage. There are a few billiards tables and a decent bar food menu (US$4–15). Friday’s after-work jam is popular, and weekend nights are generally busy when music blares and patrons are occasionally inspired to dance.
In: Entertainment, Bars

Kingston’s beach in the city, Barbican Beach is the perfect weekend hang-out spot or after-work chill spop opening hours (Mon-sun 8:00 am – 12:00 am). 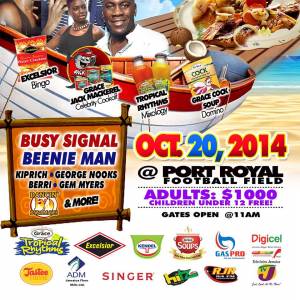 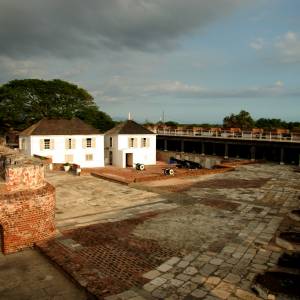